Lewis Fry Richardson argued that the frequency and severity of deadly conflicts of all kinds, from homicides to interstate wars and everything in between, followed universal statistical patterns: their frequency followed a simple Poisson arrival process and their severity followed a simple power-law distribution. Although his methods and data in the mid-20th century were neither rigorous nor comprehensive, his insights about violent conflicts have endured. In this chapter, using modern statistical methods and data, we show that Richardson’s original claims appear largely correct, with a few caveats. These facts place important constraints on our understanding of the underlying mechanisms that produce individual wars and periods of peace, and shed light on the persistent debate about trends in conflict.

On the frequency and severity of interstate wars
Aaron Clauset 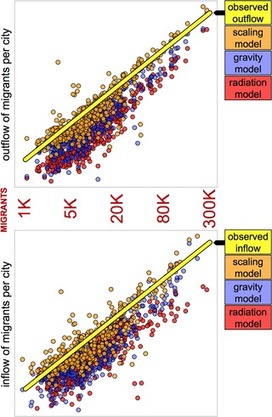 Models of human migration provide powerful tools to forecast the flow of migrants, measure the impact of a policy, determine the cost of physical and political frictions and more. Here, we analyse the migration of individuals from and to cities in the US, finding that city to city migration follows scaling laws, so that the city size is a significant factor in determining whether, or not, an individual decides to migrate and the city size of both the origin and destination play key roles in the selection of the destination. We observe that individuals from small cities tend to migrate more frequently, tending to move to similar-sized cities, whereas individuals from large cities do not migrate so often, but when they do, they tend to move to other large cities. Building upon these findings we develop a scaling model which describes internal migration as a two-step decision process, demonstrating that it can partially explain migration fluxes based solely on city size. We then consider the impact of distance and construct a gravity-scaling model by combining the observed scaling patterns with the gravity law of migration. Results show that the scaling laws are a significant feature of human migration and that the inclusion of scaling can overcome the limits of the gravity and the radiation models of human migration.

In this paper we explore several fundamental relations between formal systems, algorithms, and dynamical systems, focussing on the roles of undecidability, universality, diagonalization, and self-reference in each of these computational frameworks. Some of these interconnections are well-known, while some are clarified in this study as a result of a fine-grained comparison between recursive formal systems, Turing machines, and Cellular Automata (CAs). In particular, we elaborate on the diagonalization argument applied to distributed computation carried out by CAs, illustrating the key elements of Gödel’s proof for CAs. The comparative analysis emphasizes three factors which underlie the capacity to generate undecidable dynamics within the examined computational frameworks: (i) the program-data duality; (ii) the potential to access an infinite computational medium; and (iii) the ability to implement negation. The considered adaptations of Gödel’s proof distinguish between computational universality and undecidability, and show how the diagonalization argument exploits, on several levels, the self-referential basis of undecidability.

Symmetries are ubiquitous in network systems and have profound impacts on the observable dynamics. At the most fundamental level, many synchronization patterns are induced by underlying network symmetry, and a high degree of symmetry is believed to enhance the stability of identical synchronization. Yet, here we show that the synchronizability of almost any symmetry cluster in a network of identical nodes can be enhanced precisely by breaking its structural symmetry. This counterintuitive effect holds for generic node dynamics and arbitrary network structure and is, moreover, robust against noise and imperfections typical of real systems, which we demonstrate by implementing a state-of-the-art optoelectronic experiment. These results lead to new possibilities for the topological control of synchronization patterns, which we substantiate by presenting an algorithm that optimizes the structure of individual clusters under various constraints.