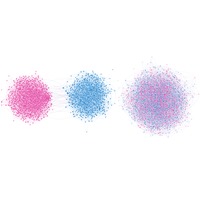 In recent years, social media has become an important platform for political discourse, being a site of both political conversations between voters and political advertisements from campaigns. While their individual influences on public discourse are well documented, the interplay between individual-level cognitive biases, social influence processes, dueling campaign efforts, and social media platforms remains unexamined. We introduce an agent-based model that integrates these dynamics and illustrates how their combination can lead to the formation of echo chambers. We find that the range of political viewpoints that individuals are willing to consider is a key determinant in the formation of polarized networks and the emergence of echo chambers and show that aggressive political campaigns can have counterproductive outcomes by radicalizing supporters and alienating moderates. Our model results demonstrate how certain elements of public discourse and political polarization can be understood as the result of an interactive process of shifting individual opinions, evolving social networks, and political campaigns. We also introduce a dynamic empirical case, retweet networks from the final stage of the 2016 U.S. presidential election, to show how our proposed model can be calibrated with real-world behavior.

Read the full article at: link.aps.org