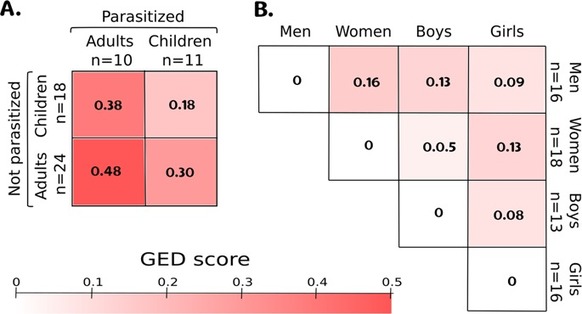 If you think you are in control of your behavior, think again. Evidence suggests that behavioral modifications, as development and persistence of depression, maybe the consequence of a complex network of communication between macro and micro-organisms capable of modifying the physiological axis of the host. Some parasites cause significant nutritional deficiencies for the host and impair the effectiveness of cognitive processes such as memory, teaching or non-verbal intelligence. Bacterial communities mediate the establishment of parasites and vice versa but this complexity approach remains little explored. We study the gut microbiota-parasite interactions using novel techniques of network analysis using data of individuals from two indigenous communities in Guerrero, Mexico. Our results suggest that Ascaris lumbricoides induce a gut microbiota perturbation affecting its network properties and also subnetworks of key species related to depression, translating in a loss of emergence. Studying these network properties changes is particularly important because recent research has shown that human health is characterized by a dynamic trade-off between emergence and self-organization, called criticality. Emergence allows the systems to generate novel information meanwhile self-organization is related to the system’s order and structure. In this way, the loss of emergence means a depart from criticality and ultimately loss of health.